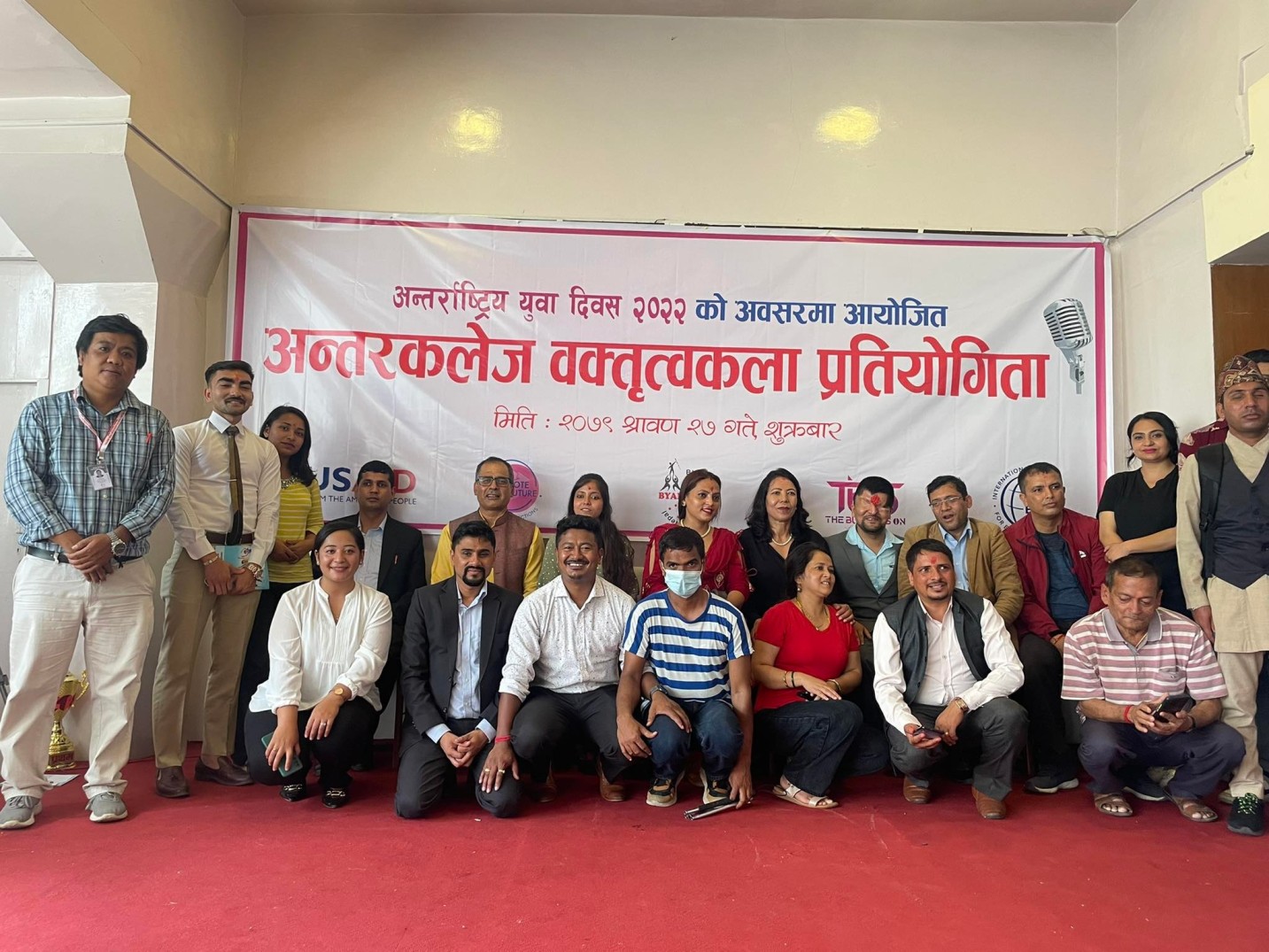 On the occasion of international youth day 2022 Blind Youth Association organized all over Nepal inter college competition on 12th August 2022 in Nepal Academy Hall (Parijat Hall), Kamaladi, Kathmandu. For the audition round BYAN call for application through its FB page and sending invitation letters to college. To apply for audition participants had to send a 3 minute speech video in Nepali language by choosing 1 topic among three topics. In the audition round total 93 youths from various district colleges had applied for the competition. Out of 93 applicants 15 applicants were selected by jury members for the final round. Among 15 final contestant were 8 female including 1 pwd female and 7 were male including 3 pwd male). There were 8 contestants from districts of Kathmandu valley and 7 contestants were from outside the valley. The first prize winner of the competition was Miss Kirpa Karuna Pokhrel class 12 student from Kantipur international college Birtanagar. 2nd prize winner was Mr. Sandip Thapa from Kathmandu university school of Law Bachelor level student who is visually impaired. 3rd prize winner was Mr. Sugyani BK class 12 student form Jaya Multiple college Kathmandu respectively consolation winners were Mr. Saugat Mall from National college Kathmandu who is visually impaired and Miss. Binita Mauli Satar from Mahendra Morang Adarsha campus Dharan who is visually impaired.We would like to thank all the young enthusiastic participants for taking part in this speech competitions, colleges and IFES for the support.

Blind Youth Association is an organization establish by the Blind and Partially Sighted Youth of Nepal. With the vision of ‘BPS people of Nepal enjoying dignified life in an inclusive society’. BYAN is currently working in the area of policy advocacy, education, employment disaster risk reduction, political participation and promotion of SRHR of persons with […]

Call for Expression of Interest

TERMS OF REFERENCE (ToR) TO THE CONSULTANT/AGENCY TO DEVELOP PROPOSAL ON SEXUAL AND REPRODUCTIVE HEALTH RIGHTS AND CAPACITY BUILDING Background : Blind Youth Association is an organisation establish by the Blind and Partially Sighted Youth of Nepal. With the vision of ‘BPS people of Nepal enjoying dignified life in an inclusive society’ BYAN is currently […]

Translation and interpretation training for BPS

Opportunity for Blind and Partially sighted Youths : Interpretation and Translation trainingBlind Youth Association Nepal(BYAN) has been conducting the Job preparedness training for past 5 years and working in the creation of employment opportunities for blind and partially sighted youths. This year BYAN is going to organise the one month long translation and interpretation training […]